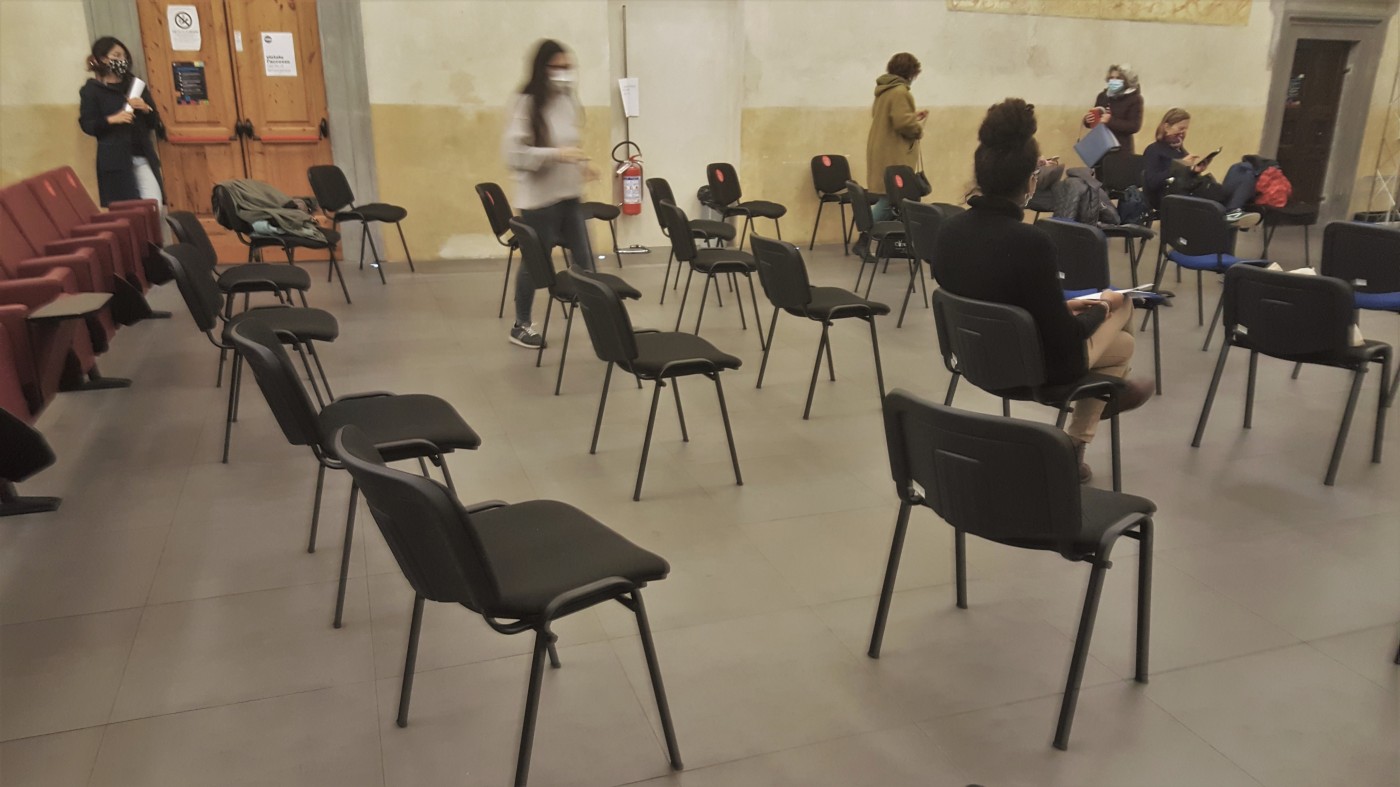 When Ninì told me the auditions were at 9 PM, I was a little confused.

Alright, I thought, at least I get to meet some real people there. So far, I had only gotten to know the anonyme shadows of my fellow students on the WebEx-online-lessons; my roommate Valentina and some weird acquaintances with Erasmus-girls on Tinder being the only exception.

8:55 Nervously I entered the Auditorium. An old lady checked my temperature at the entrance and I was expecting that my stage fright would make my body temperature jump to 40°C. But no,

I added some disinfectant gel to the sweat on my hands and rubbed the slimy mixture into my hand while thinking of the upcoming audition. Two swing doors gave way to the practice room. I looked at a long hall with a lofty ceiling made of wooden beams carrying the weight of the ancient roof, the walls covered with beautiful frescos in all kinds of colors. Right behind the conductor’s piano was a painting of a huge scarlet curtain. And in the back, there was a podium with crimson armchairs for the audience.

“Normally this is being used as a lecture hall for the University of Florence”. Ninì explained in passing. “One of many old churches here. This one actually has a practical use now.”

I was overwhelmed by the sheer richness of history and culture of this place. And this was the place where I was supposed to practice twice a week with the Coro Universitario di Firenze from now on. Provided that I passed the audition anyway. I focused on the people around me. Everybody was wearing masks, so it was hard to tell, but apparently, they were mainly Chinese. Where were the Italian people?

9:10 The conductor entered the auditorium.

“Ciao a tutti! Are you guys here for the first time?”

We nodded hesitantly and he asked us to stand around the piano. Although I had calmed down in the meantime whilst waiting, at that moment my heart once again pounded heavily in my chest. Starting off a little shakily, the auditions then went surprisingly well. In fact, due to my nervousness I managed to sing at least a third higher than usually. That is why the conductor put me into Tenor 1 (I got to regret this during the later practices, I usually sing Baritone and have a hard time with high pitches).

09:20 The Italians came dropping into the room.

This went on for 5 more minutes. Once everybody was seated, Patrizio, the conductor, decided we should each introduce ourselves and tell the others how long we have been living in Florence. By then, our group had grown considerably and we were about 40 people.

Looking back, the experience of my first choir practice still makes me laugh. It was one of the moments when my “Swissness” (arriving 5 minutes early, expecting a clear structure and efficiency while practicing) strikingly collided with the Italian way of life. Having attended the fifth practice now, I feel a lot more secure than I did only a few weeks ago. Practice still starts at least 20 minutes late, but I always arrive at 8:55. It sounds weird, but if I arrived late, I would feel as if I would be betraying myself. And although I prefer starting on time in order to get the most out of practice, I enjoy talking to my fellow singers during those 20 minutes. Of course, I also use the opportunity to go drink a beer or a Negroni with the others after the rehearsals. So far, I have never gotten home before 1 AM though. Since practice takes place twice a week on Tuesdays and Thursdays, my daily rhythm has furtively been shifting into an Italian direction. I wonder what my time management will be like in a month or two…