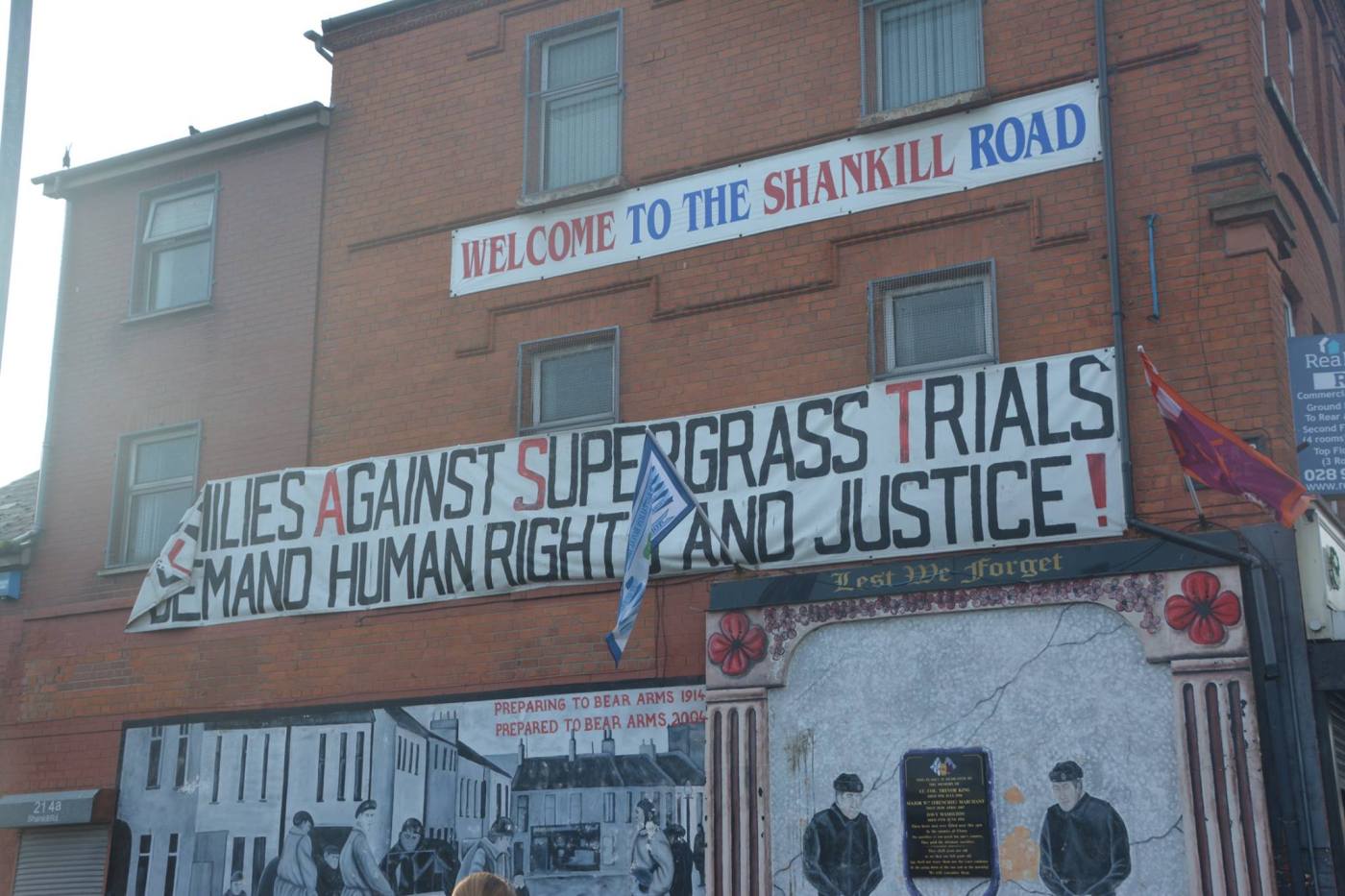 Flags are omnipresent in Northern Ireland, and especially in West Belfast. Historically rooted, people identify with various flags depending on their political and religious background. Walking along the Falls and Shankill Road gives an impression of how present the history of the Northern Ireland conflict, locally called ‘The Troubles’, still is. Countless memorials, brasses and mural paintings line the roads, all of which are arranged in a very touching manner by the use of pictures, poppy wreaths, inscriptions, and most importantly, flags.

The conflict, which was mainly based on a dispute over the constitutional status of Northern Ireland, divided the country into two sides, both Protestant and Catholic. The Protestant side (Unionists/Loyalists) considered itself as British and wanted Northern Ireland to remain part of the United Kingdom (UK) whereas the Catholic side (Nationalists/Republicans) saw itself as particularly Irish and argued in favour of a reunited Northern Ireland with the Republic of Ireland. Hence, flags were used back in the day not only to indicate one’s religion but were also an important symbol of self-identification. At the same time, the pressure on people to live in designated areas for Protestants or Catholics increased rapidly and flags took up a new function as territorial markers.

The sensitivity of the Northern Irish towards flags can be traced back to these days. Although the active violence, which was so present during ‘The Troubles’, started decreasing in the years after the Good Friday Agreement 1998, the staging of the conflict proceeded on a political level. The agreement stated that Northern Ireland will remain (at least for now) part of the United Kingdom and established a power-sharing government between the two opponents (unionist and nationalist parties). Nevertheless, the symbolism of flags maintained its significance for several reasons until the present day. First of all, flags were always seen as carriers of identity in Northern Ireland. During ‘The Troubles’, hatred towards the ‘enemy’ was projected onto their flags. The flag itself became a metonymy for the opposing side, a view which is still deeply ingrained in the memory of the people, not only because nearly all of them lost family members, friends or acquaintances in ‘The Troubles’ but also because lots of murders remained uninvestigated. A change of this attitude does not seem to be possible until a new generation takes over, particularly in politics.

Secondly, people feel intimidated by flags very easily, as they are often used to provoke members of the other religious community, especially in shared facilities such as schools or public spaces. Thirdly, Northern Ireland, which needs to be rather described as a statelet than a country, has no uniform national flag. Thus, the Union flag is used to mark official buildings which is intimidating for Catholics who consider it the ‘flag of the British occupier’. As a result, the display of the flag is limited to designated flag days.

Finally, Northern Ireland has as a statelet no official national day. Protestants celebrate ‘The Twelfth’ (victory of Protestants over Catholics at the Battle of the Boyne 1690) in July, usually along with bonfires and the burning of ‘Catholic flags’. Catholics on the other hand, celebrate St. Patricks Day on 17th March. Also, flags are waved on memorial days relating to important events in each religion’s history. Catholics for example display flags as part of the remembrance of the Easter Rising 1916 whereas Protestants specially celebrate the Battle of the Boyne. Hence, national identity in Northern Ireland is not bound to political borders but to sectarian loyalties and allegiance to Ireland or the United Kingdom which makes it difficult for the two communities to agree on a common flag.

Therefore, both sides make use of various kinds of flags for supporting their viewpoints. Unfortunately, not all of them are easy accessible to foreigners. Along with the Union flag, Protestants are most likely to use former paramilitary flags, the Ulster Banner (former coat of arms of Northern Ireland) or the Scottish flag (as a sign of their Scottish ancestry). On the contrary, Catholics use along with the Irish Tricolour the Sunburst flag (flag of Irish nationalist) or the Starry Plough (flag of Irish nationalist socialism). Less evident in its meaning is the use of the Cuban flag to sympathise with the revolutionary acts of Che Guevara and Fidel Castro. Last but not least, the Israeli (Protestants) and Palestinian (Catholics) flags are adapted by both sides to show sympathy and underline parallels between the Israeli-Palestinian conflict and the current situation in Northern Ireland.

Flags and their meaning are not always evident for visitors, but spending some time in Belfast, you get to learn very fast that knowing flags and their meaning is crucial for communication. Identifying a flag allows you to address your opposite in the right manner, e.g. you know what you are allowed to say and what not. For instance, you should better avoid talking about Orangemen and the Battle of the Boyne in front of a member of the Catholic community. What is more, it helps you to avoid misunderstandings as for example one guy mixed up the flag of the Ivory Coast on a t-shirt with the Irish flag and punched his opponent in the face. Flags are used, especially in West Belfast, to exploit the Northern Irish history and its consequences. Walking along the Falls and Shankill Road was one of the most impressive but also emotional events during my stay abroad. All those memorials along the streets are very touching as they are not just a display of lists of deaths, but they show that these were real people who died. People with names, a face and who had caring families. They were fathers, mothers, sons and daughters and anybody could have suffered the same fate, also myself, if I had been at the wrong time in the wrong place. Remarkable is also the way history is dealt with which is omnipresent in Northern Ireland and affects daily life very much, be this in politics, sports tournaments or even university. Although a foreigner might think at first that cross-community sympathy seems to be much better nowadays, a closer look still shows how much communities are divided. In one of my classes, for example, most of the Catholics are sitting next beside each other in the right half of the room, Protestants on the other. It took me a while, to figure this out, as I was not enough aware of their religious affiliation. Had I paid more attention to flags or other symbols, I would have recognised this much earlier.

In my view, Switzerland has a completely different way of dealing with flags. First of all, national identity rather than religion is important for identification with a flag. Secondly, although every canton has its own coat of arms, Swiss abroad would usually identify with the national flag rather than the cantonal coats of arms. Furthermore, they would refer to themselves as being ‘from Switzerland’ unless they talk to other Swiss. In contrast, as identity in Northern Ireland is not bound to political borders, people would rather present themselves as being ‘from the UK’ or ‘from Ireland’. Although history is similarly exploited in Switzerland, it is rather used as a means to create national identity (e.g. festivities Battle of Marignano) and cross-community solidarity rather than the single identity of a religious community. Nevertheless, it would be very interesting to compare the way of dealing with the history of Swiss cantons during the Reformation with the current affairs in Northern Ireland.